Posted on by masker

Prominently known as the “city of masks,” Venice is a famous city in Northern part of Italy which is admired by many for its beautiful and romantic scenery. Every year, before the start of Lenten season, Republic of Venice traditionally holds a festival called Carnival of Venice. 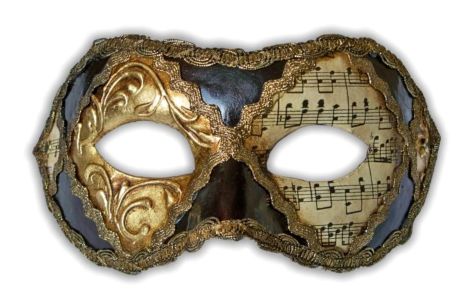 As this festivity is approaching, so are the prevalent masquerade balls, parties, and shows, which inhabitants and sightseers are preparing to. A lot of backpackers and travelers go to Venice just to see these masks, but if you really want to enjoy and appreciate the Venetian tradition, why not purchase your own masquerade masks and take pleasure in becoming a part of the enthralling event?

Carnival of Venice or ‘Carnevale Di Venezia’ is a celebration commemorating the time when Venetian masks were widely used in the city throughout all walks of life. Use of Venetian masks traces its roots back in the 13th century, when Republic of Venice is in its peak of success when it comes to trading, buying and selling, dealings, and the like. This had generated the city a lot of wealth and income. This wealth gave birth to the now popular Venetian masks.

During those times when trading and deals were widespread in the city, residents prefer to make transactions without disclosing their identity, thus the start of wearing masks. This act of wearing masks and concealing identity became common to the citizens of Venice during that era. On a positive note, this deed of hiding identity through wearing of masks allowed the general public to be treated equally no matter what social status they are in. Likewise, this anonymity among residents prevented inequality by allowing the voices of the marginalized sector to be heard equally important as the people in power. Residents no need to bother raising important issues without the fear of being recognized. This process was seen to be beneficial for both the Venetian people and the officials of the government because it created a venue for honest feedbacks and opinions among the people.

However, though the process was helpful in promoting equality among their citizens, it also became detrimental to the society after some time. This process of concealing identity created a room for the immoral acts of thy people. The downside of this anonymity allowed some people to take advantage that their identity is unknown. Having in mind that nobody could be identified from their actions, then people, without fear and inhibitions, could act any way they want because they are free to do so. Venetian residents and even travelers in the city engaged in morally sinful acts such as having casual sex with different partners. Gambling also became widespread all over the city, even in religious places. Women became more liberated by wearing revealing outfits.

These drawbacks of living in anonymity triggered the Italian government to officially forbid the wearing of masks throughout the city. After some time, during the 1970s, officials decided to give life to a lost tradition, hence the Carnival of Venice, which is celebrated weeks before Ash Wednesday. Along with the celebration of Carnival of Venice, is the revival of wearing Venetian masks. These masks are popular because of their ornate design. Venetian masks are handcrafted by skilled artisans using different materials such as leather, papier mâché, metal, or plasters. It is highly distinguished for its complex design, use of different ornaments and decorations, use of different bright colors, usually with gold and silver as accents, and use of stylish decorations and fashionable accessories such as fur, feathers, ribbons, artificial gems, or jewels.

Venetian masks are classified into various types which include the most popular among all which is the Bauta mask. Other masks include the Moreta mask, the Gnaga mask, the Pantalone mask, the Columbina mask, the Medico Della Peste or most commonly known as the Plague Doctor mask, and the Volto or Larva mask.

Let’s talk about the Bauta Mask first. Sometimes called as ‘baùtta’, this is the type of mask that would cover the whole face of the wearer, and most of the time, it is white in color. The structure of the mask is styled with inflexible chin line, with a protruding nose, an upper lip but without a mouth, which could actually alter the voice of the mask wearer. Bauta mask was designed to allow the wearer to eat, drink, breathe, and talk easily without having to take out the bauta mask, by carving the jaw line of the mask as square titling upwards. This made the bauta more popular because the wearer can remain unidentified throughout the duration of the event.

A bauta mask, often accompanied by a cape or a small cloak (usually red, black, dark blue, or white) and a tricorn style of hat or a three-cornered hat, is used by both used by men and women, but for a married woman, she was obliged to wear a bauta mask when going to places like a theater.  Eventually, during the 18th century, bauta masks were used as standard masks for Venetian citizens. Venetian government enforced rules that residents should wear bauta masks as a disguise when attending political decision-making events such as elections. Just ensure that upon wearing this mask, no weapons should be carried along with them.

Another type of Venetian mask is known as the moreta mask. In Venice, this mask is popular and used mainly by ladies. The mask has an oval shape which is made from black velvet and decorated with a veil and a hat with large edges. The shape and color of the mask enhances the facial features of a woman and believed to make the skin more striking and glowing. However, wearing the masks prevents the wearer from talking, eating, or drinking since to keep the mask in place, you have to bite on a button or on a small support that is attached to the mask.

Third type is the Columbina mask, also called as Columbino and Columbine. This type of mask only covers half of the face, held up by a stick or sometimes, like other Venetian masks, it is tied in the face using a ribbon. A Columbina is designed with several fashionable decorations such as gems, feathers, or fur. The columbina mask is said to be designed for an early actress in the Commedia dell’arte, who did not want to completely hide her whole face by a mask.

One of the strangest types of Venetian mask is the Medico Della Peste or more popularly known as The Plague Doctor mask. The mask is said to be strange because of its long mouth. The original design of this mask came from Charles de Lorme, a French physician who, way back in 17th century, used a mask that would keep him safe while he was treating victims of plague during that period, thus the term “the plague doctor.” In the initial design, the structure of the mask has a round eye wherein eyeholes were covered with crystal discs, and a long hollow mouth. Charles de Lorme partnered the mask with a long black cloak and a black hat, with white gloves, and a stick. The stick was used so that the physician could prevent him to be in physical contact among his patients. Some doctors followed de Lorme’s safety precautions, hoping to prevent them from getting their patient’s disease. They also wear the cloak, hat, gloves, and stick, and the same structure of the plague doctor mask, but making it more decorative than de Lorme’s.

There is also a plain mask. This type of masks are called Gnaga mask. These masks are often non-descriptive and were mainly used by men to hide their homosexuality. Most men who use this mask imitate how a woman dress up, and even imitate a woman’s voice and manners.

One of the best Venetian masks is the Pantalone mask. This type of mask is usually the choice of Venetian people to use in gatherings and parties. Normally, the facial features of the mask include marked eyebrows, hooked nose, and a short beard. This is typically accompanied by cloak, tight fitting trousers, jack, a beret, with a sword that is tied to the wearer’s belt, and Turkish slippers. The mask is usually used by a businessman.

The last type from my list is the Volto mask or what others called the larva mask. This is more similar to a bauta mask, which also allows the wearer to eat, drink, or talk without removing the mask. Same as the bauta mask, it is also typically white in color, and worn accompanied with a cloak and a tricorn hat. Aside from having a shape that would allow the wearer to eat easily, this kind of mask is also very comfortable to wear because it is very light and made up of fine wax cloth. 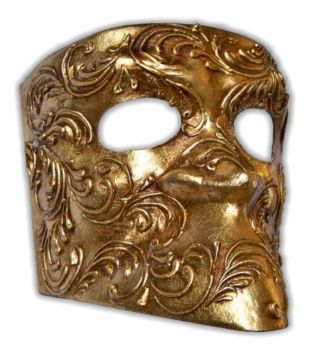 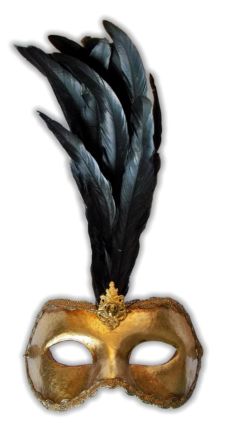 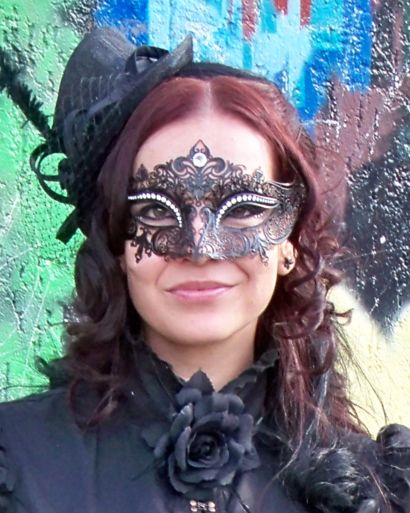 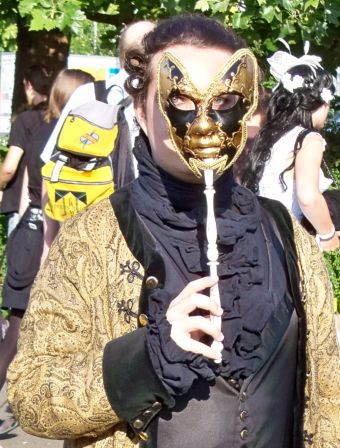