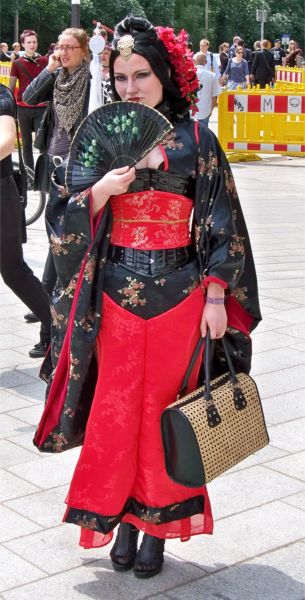 Geisha costumes is traced from the Japanese culture of female entertainers called “Geisha”. Traditionally, the female entertainers wear geisha costumes in stage performances like interpretative dance, theatre presentation or classical music. The geisha’s appearance usually change as she goes through life, from a young girl, a heavy make-up “maiko”, to an older and somber geisha – but the Geisha costume continued to become a popular costume for a lot of women – not only in Japan, but also in other countries.The geisha costume goes perfectly well if you have black hair. However, if that’s not possible, consider wearing a black wig. Wear your hair straight and let them fall down into the shoulders, then use accessories like hairpins, metal clips and flowers to add with the detail. Another important feature in a geisha costume is to have a full make-up. Cover your face and neck with a thick white base mask. Powder can look right, but it’s advisable to use clown face paint. After applying the white base, apply black accents in the eyebrows and then around the eyes. Make sure to consider the maturity of the geisha, short eyebrows for younger girl and longer eyebrows as they get older. You can use eyebrow pencil and mascara brush to make the eyebrows darker.

Wear the kimono to complete the Geisha costume. Younger geisha wear brighter colored and exquisitely styled kimono to exude exotic balance, with the pattern of the dress getting more subdued as the geisha gets more matured. For the footwear, wear a flat soled sandal, “geta” (known as wooden clogs) or black boots.

This entry was posted in Carnival, Costumes, For Adults and tagged costume, costumi, deguisement, disfraz, geisha, kostüm. Bookmark the permalink.
This website uses cookies to improve your experience. We'll assume you're ok with this, if you continue. Accept Read More
Privacy & Cookies Policy